Here comes the credit-card crunch again. Consumers, and increasingly subprime borrowers, are taking on more debt and could find themselves slipping back into the black — or rather the red — hole of financial distress.

“Banks want to lend,” says Steve Chaouki, group vice president for the financial services business unit of TransUnion, the credit-rating bureau. “And there isn’t much demand for credit from prime consumers.” 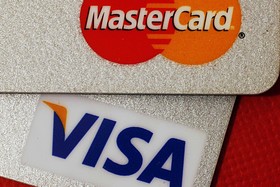 Credit-card solicitations have fallen from their sharp increases a year ago and mailings to high credit scorers are dropping far faster than they are to those with below-prime scores, according to Ipsos, an international research firm.

“The higher-end FICO groups appear saturated or tapped out, leaving the appeal of direct mail to these groups less enticing,” says Roy Persson, the director of competitive tracking services for Ipsos.

Revolving credit, the bulk of which is credit cards, peaked in 2008 at $1.01 trillion, according to the Federal Reserve. That debt had recorded steady drops up until the beginning of this year when it started a slow upward crawl. In October, credit-card debt rose $3.38 billion, after a $2.19 billion decrease in September, to stand at $857.6 billion. That’s $6.2 billion more than the fourth quarter of last year, though still considered low.

TransUnion expects credit-card debt to keep swelling in 2013, reaching 2009 levels. It also predicts delinquencies of 90 days or more, which hit their lowest levels since 1994 and held flat throughout much of this year, to begin rising again.

“Some of this can be attributed to credit-card delinquencies so low that at some point they were bound to increase,” Chaouki says. “A more significant factor may be that credit-card originations have been increasing in the last few years, and with that increase we have seen nonprime borrowers receive not only more credit cards but also comprise a larger share of new credit cards.”

Cards going to nonprime borrowers, or those with VantageScores lower than 700 on a 501-to-990 scale, account for nearly 30% of new credit, according to TransUnion’s data.

United Parcel Service Inc. and rival Fed Ex Corp. have already made themselves as indispensable to Christmas as Santa Claus. This season, though, they’re taking a much more active role in holiday shopping. WSJ’s Betsy Morris reports. Photo: Bloomberg.

Matters could get worse yet, considering consumers are admitting that it will take them extra time to pay off holiday debt.

Nearly 25% of respondents in a recent myFICO survey said they will need more than three months to pay off this year’s holiday charges. That’s a notable leap over the 18% who said so in a similar survey the consumer division of FICO, the credit-scoring company, conducted in 2010.

And then there are the recent spikes in nonrevolving debt, which includes auto loans and college-tuition balances that are reaching unprecedented levels. Nonrevolving debt vaulted $10.8 billion in October to $1.896 trillion.

“The increase in student loans and credit-card debt is a disturbing trend that may have disastrous consequences for consumers,” says Nick Jacobs, an administrator for CARE, the Credit Abuse Resistance Education Program. “Unless consumers fully understand the obligations attached to these debts, they may soon find themselves in more trouble than they can handle.”

Why would consumers, only three years after piles of credit-card debt and mortgage debt sent many spiraling out of financial control, allow this to happen again?

They might not have ever really changed their ways, according to Odysseas Papadimitriou.

“There are a lot of people with the wrong impression that credit-card debt was going down,” says the chief executive of Evolution Finance, which operates Cardhub.com, a credit-card research site. “It was going down because people were defaulting and their debts were being taken off the books. That didn’t mean they didn’t owe banks the money anymore, just that the banks had written them off.”

Banks charged off some $208.8 billion in bad loans from 2009 to 2011, with charge-offs declining each year. They’re on track to take upwards of $33 billion off the books this year.

“Fewer people are falling so far behind on their credit-card payments that banks have to write their debt off the books,” Papadimitriou says. “That’s great. Still, you can’t overlook the fact that banks charged off $7.78 billion in old credit-card debt during the third quarter alone.

“We never changed our mentality about credit-card debt,” he adds.